Kaikōura is one of the few places in the world where Sperm Whales can be seen year-round and close to shore. They congregate here because the 3km deep Kaikōura Canyon runs right up against the coast creating a rare system of sea currents that sustain an incredibly rich marine food chain. Sperm Whales are at the top of this food chain and the abundance of fish ensures they make the waters of Kaikōura their home. 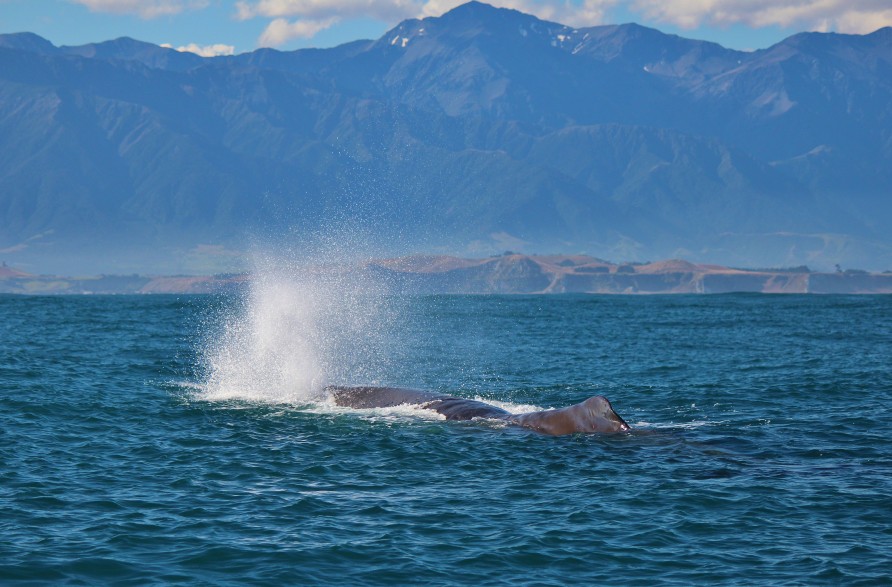 There he blows. Male sperm whale off the Kaikōura coast.

Sperm whales eat prey found on or near the ocean bottom, squid is their main diet but they also eat sharks and various bony fish. Unlike other species of whales that feed only during certain times of the year, sperm whales feed all the time, they can eat around 3% of their body weight each day which for an adult male sperm whale can mean around 1.5 tonnes of food per day.

Kaikōura plays host to the male sperm whales only, with the females and the young whales found in the warmer tropical waters. It is a feeding ground for the young males who come here to feed them and build themselves up making themselves more socially and sexually acceptable for later on in life. 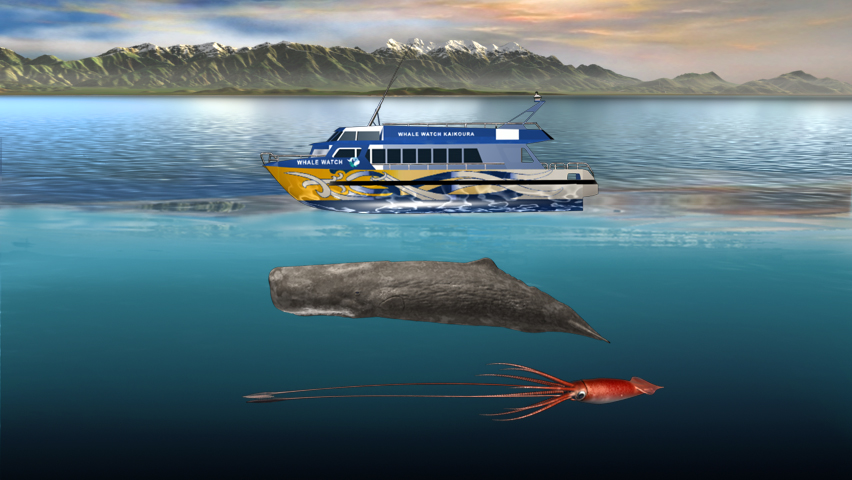 A species of baleen whale that migrates from the Antarctic to the tropics to mate and give birth in winter. Humpback Whales tend to feed within 50m of the water's surface, taking krill and shoaling fish. 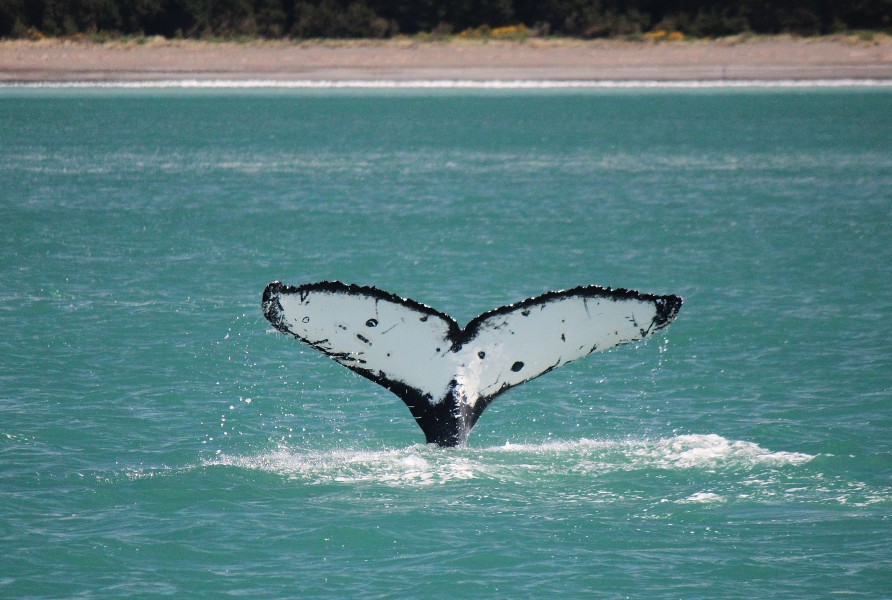 They are frequently seen in Kaikōura during winter months (Jun / Jul / Aug) where they sometimes perform spectacular displays of spyhopping, breaching, lobtailing and flipper slapping. The tendency for Humpbacks to come very close to shore means they can become tangled in craypot lines. In 2003, a local Kaikōura fisherman, Tom Smith, was accidentally killed while trying to free a trapped Humpback Whale in South Bay.

The humpback has the most diverse techniques of feeding methods of all baleen whales. Its most inventive technique is known as bubble net feeding: a group of whales blows bubbles while swimming in circles to create a ring of bubbles. The ring encircles the fish, which are confined in an ever-tighter area as the whales swim in smaller and smaller circles. The whales then suddenly swim upward through the bubble net, mouths agape, swallowing thousands of fish in one gulp. This technique can involve a ring of bubbles up to 30m in diameter and the cooperation of a dozen animals. Some of the whales take the task of blowing the bubbles through their blowholes, some dive deeper to drive fish toward the surface, and others herd fish into the net by vocalizing. Humpbacks have been observed bubble net feeding alone as well.

Humpbacks have a distinctive 3-6m (10-20ft) heart shaped to bushy blow.   They will generally breathe every 20-30 seconds for two or three minutes then dive in their peculiar ‘humpback’ fashion, staying under the water for 3 to 28 minutes.

Blue Whales are the largest, heaviest and loudest animal that has ever lived on Earth. They can be as long as a Boeing 737 and six times as heavy. Their heart is the size of a small car and their tongue as big as an African Bull elephant. 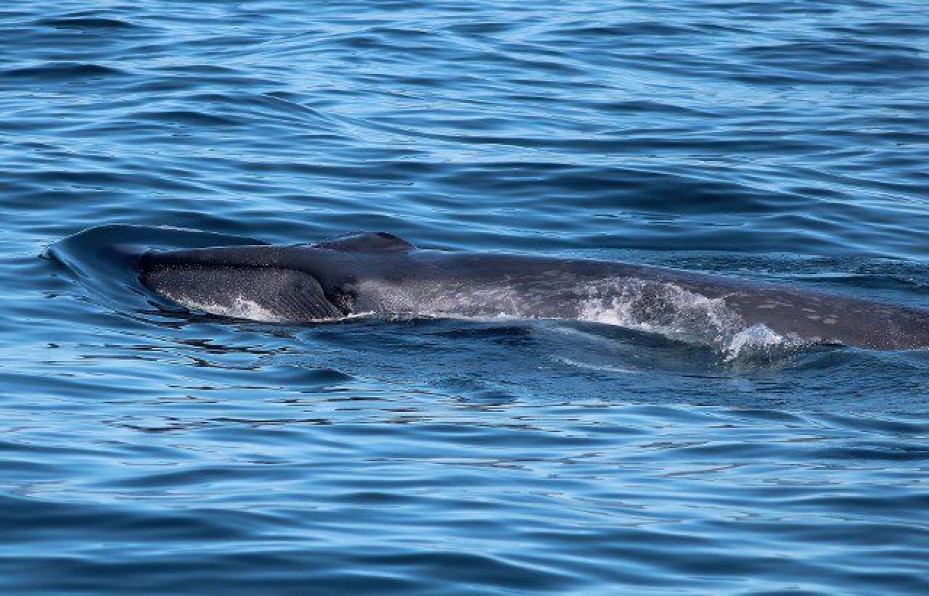 The whistle emitted by a Blue Whale is so loud it can be heard underwater across entire oceans. The Blue Whale blow is over 9 metres high and so large it forms a cloud that floats above the sea long after the whale has dived. A single Blue Whale needs to eat as much as 4.5 tons of krill a day to fuel their massive bodies, filtering them from the water with 400 pairs of baleen plates and feeding around the clock. The name 'Blue Whale' comes from their startling electric blue skin pigmentation that gives off a spectacular neon glow under water.

Once numbering around 225,000, Blue Whales have been hunted to near extinction. In the 1930-31 whaling season alone 30,000 Blue Whales were killed, mostly by British and Norwegian whalers. Less than 2,000 remain in the Southern Hemisphere today. They have been protected since 1965. Blue Whales are a member of the Fin and Sei whale family. The endangered Sei Whale is still killed by Japanese whalers. All three whales are seasonal visitors to Kaikōura.

Blue whales are sighted off the Kaikōura coastline at various times throughout the year, generally on a mission as they are passing through, when sighted on our tours it is very special indeed.

Right whales have large wide bodies, broad flippers and no dorsal fin on their back. They are dark grey to black in colour. A right whale's head is covered in raised patches of rough skin which are called ‘callosities’. The callosities are usually a whitish colour. Different types of whale lice live on the callosities. 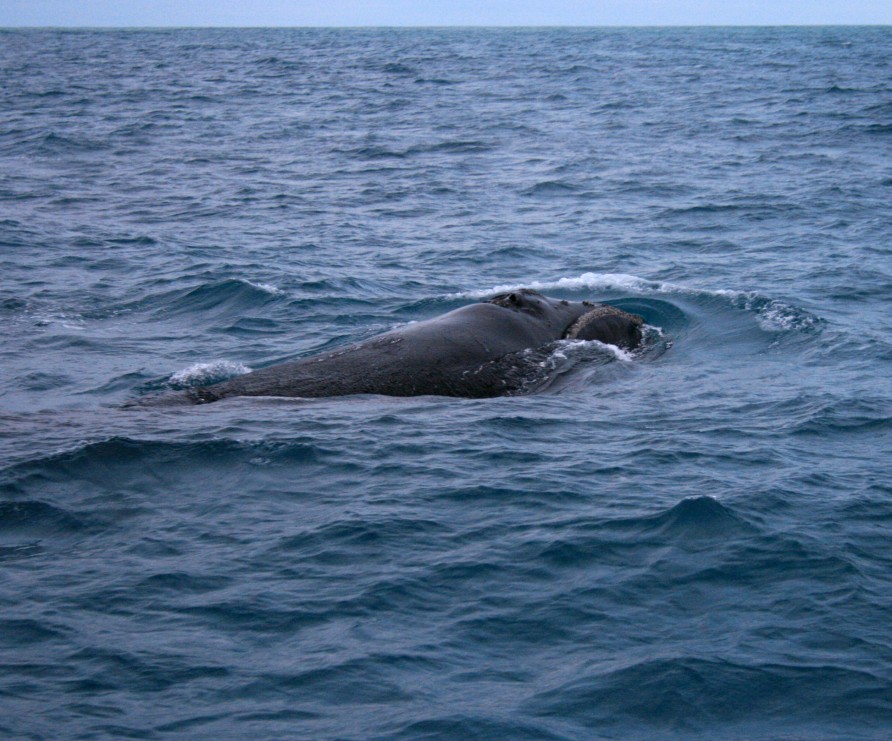 Right whales have a huge mouth! Their baleen is up to 3m long and they have over 500 pieces inside their mouth. The baleen has fine hairy fringes on the ends which helps to trap their food. Right whales feed on copepods which is a type of zooplankton. Each copepod is about the size of a grain of rice and the whales eat about 3 tonnes every day when they are feeding.

This whales slow speed and the fact that its body is so rich in oil that it floats (even when dead) led it to be the “right whale” to catch. With them being an easy catch right whales suffered most of all from the centuries of slaughter.

They are an endangered species because they were hunted for meat, whalebone and valuable oil. They are slow breeders, which means that the species has been slow to recover. They have been protected since 1937 and have shown some signs of recovery.

Killer whales are also sometimes referred to as the Orca, Orca whale or Blackfish. 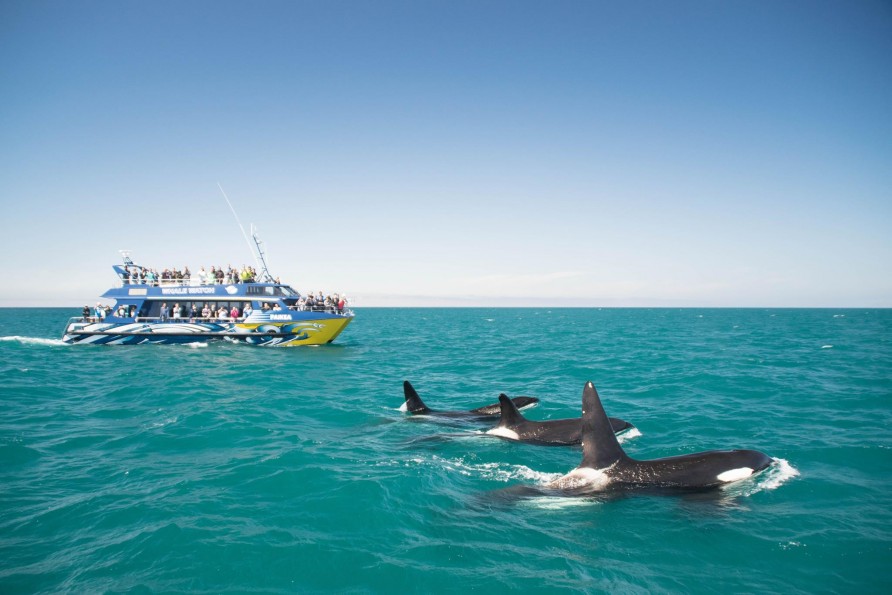 They have the same large bulbous head containing spermaceti oil and a short narrow mouth with no teeth on the upper jaw. They eat small fish, deep-sea shrimps and cuttlefish.

The Killer whale is one of the only cetaceans (cetaceans include whales, dolphins and porpoises) known to hunt other marine mammals aptly nick-named the wolves of the sea as they hunt in packs much like wolves do on land.

Orca are known to hunt everything from small dolphins to Blue whales, the largest known animal in existence.

At a whaling station off Eden in Australia a resident Orca named ‘Old Tom’ would herd baleen whales into the bay in return for a reward of whale’s tongue.

Until recently the Minke whale, found in all oceans of the world, was considered to be just one species. Recently, however, the Antarctic Minke has been classified as a separate species from the dwarf Minke. Both dwarf and Antarctic Minkes are found in the Southern Hemisphere.

Minke whales were hunted extensively by whalers during the 70’s and 80’s, with hundreds still being killed today under the guise of scientific research in the Southern Oceans.

Minke whales can be hard to research; they are fast, observed swimming at speeds of 30 km/h, and their surfacing can be sporadic and hard to follow. Little is known about this species due to their elusive behaviour 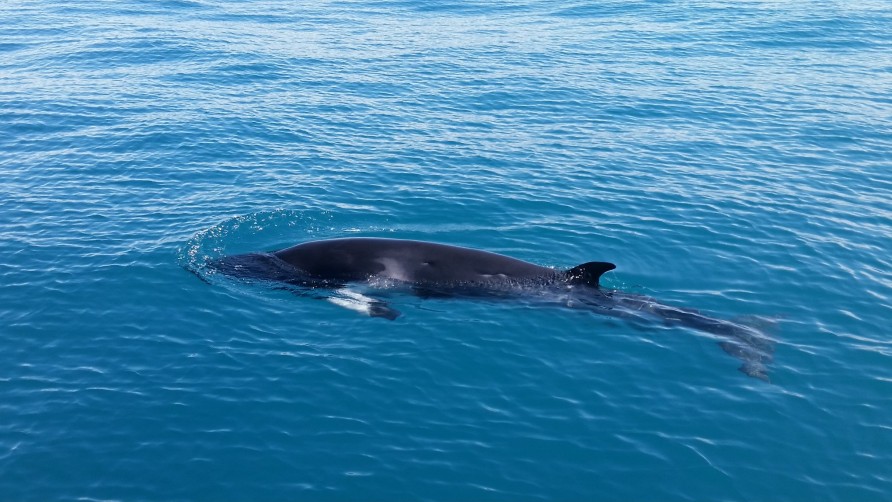 Pilot whales are known for their jet black or dark grey or white markings on their throat, belly and sometimes behind its dorsal fin and eye. 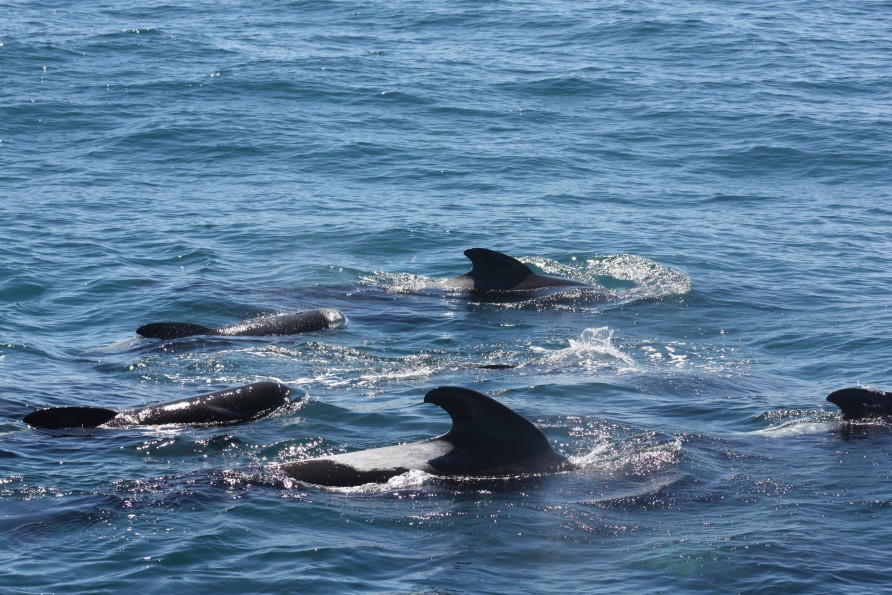 They are very social family animals and can travel in pods of up to a hundred at a time and at times bottlenose dolphins can be seen travelling with them.

They have very strong family bonds, so when one individual strands the rest of the pod tends to follow. Farwell Spit which is at the top of the South Island of New Zealand is renowned for this happening.

Pilot whales generally take several breaths before diving for a few minutes. Their feeding dives may last for around 10 minutes with an adult pilot whale needing about 50kg of food a day. Squid is the main food source for the Pilot Whale but they also consume various types of fish. They are also known to consume crustaceans, octopus, and cephalopods.

They have the same large bulbous head containing spermaceti oil and a short narrow mouth with no teeth on the upper jaw. They eat small fish, deep-sea shrimps and cuttlefish.

When startled, the Pygmy Sperm Whale emits a dense cloud of reddish-brown intestinal fluid that acts as a decoy much like the ink of a squid. Small numbers of Pygmy Sperm Whales continue to be killed by Japanese and Indonesian whalers.

The chance of seeing any of the 11 species of beaked whales known to inhabit New Zealand waters is slight. In some cases the only proof of their existence is their bodies washed up along the coastline.

The Gray’s, Arnoux, Cavier’s and the Southern strap-toothed whale is the most common seen in New Zealand waters.

Beaked whales live in the open ocean and dive around 300m for squid.

They vary in length from 3m to 13m, they have a small head, beak and bulging forehead. 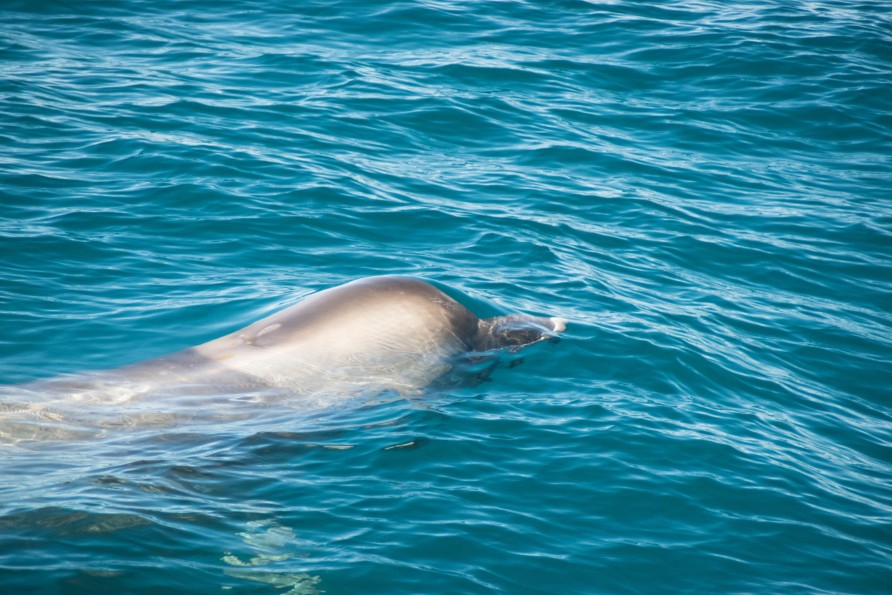 Fin whales can reach up to 24 meters in length - second in size only to the blue whale.

These whales have a life span of at least 80 years. The fin on their back gives them their name - this fin is very easy to see and one of their predominant features.

Like other baleen whales, the fin whale also skims the surface and takes in huge volumes of water. When they close their mouths, the water is pushed out through the baleen and the prey is caught on the inside of the baleen. A fin whale eats up to two tonnes of food every day this way! 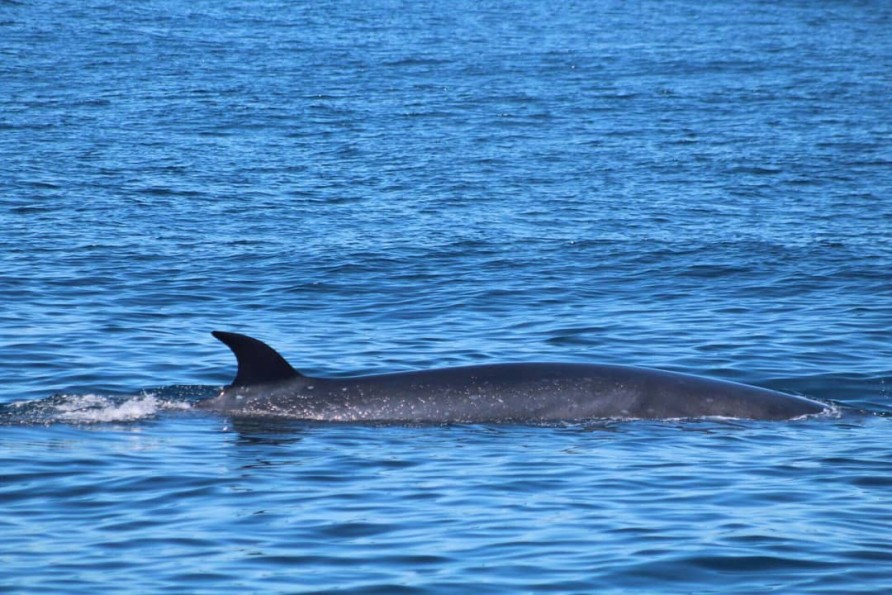